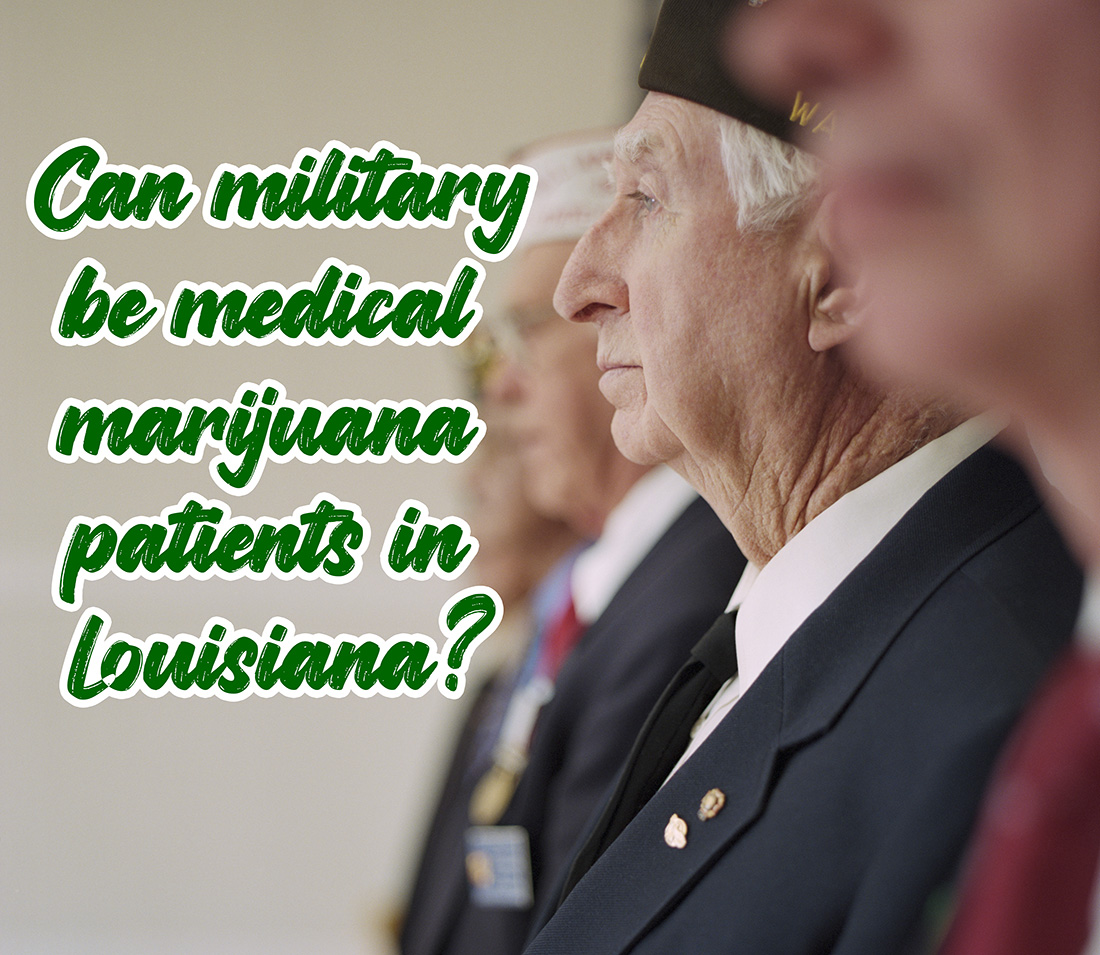 Can military be a medical marijuana patient in Louisiana?

People who are interested in using medical marijuana to treat chronic conditions have a lot of questions. The United States spent the years between 1937 and 1996 hammering into the heads of Americans what a frightening and dangerous drug marijuana was. It wasn’t until 1996, when California legalized marijuana that it finally started down the road to a comeback. But, since the federal government has yet to reschedule marijuana and it’s still seen as a schedule 1 narcotic, there are LOTS of grey areas when it comes to marijuana and the law.

ONLY medical marijuana is legal in Louisiana. Marijuana that is obtained from somewhere other than one of the designated dispensaries is illegal, even if it’s used for medicinal purposes. A person can possess 14 grams of marijuana or less and would be punished with a fine of no more than $100 and no jail time (more than 14 grams but less than 2.5 pounds can mean up to six months in jail and more than 2.5 pounds is a felony). Cities in Louisiana have also decriminalized possession of fewer than 14 grams including New Orleans, Shreveport, and Baton Rouge.

To legally use marijuana in Louisiana, you have to see a doctor who will then evaluate you and tell you if they think it might benefit your chronic medical condition (that condition can be anything). If they believe it will, recommendations (like prescriptions) are faxed to one of the Louisiana dispensaries. Just to clarify, the doctor will not have any medical marijuana to sell and the pharmacist cannot write the recommendations for a patient’s medical marijuana products.

For someone who has been arrested for possession of 14 grams or less or anyone who wants to “get legal”, the option is fairly simple. Submit new patient forms to The Healing Clinics and, if you qualify, you can use any product you purchase in one of the nine Louisiana dispensaries legally and without fear of reproach. To prove you’re a participant in the Louisiana medical marijuana program, ask for a copy of your recommendation or show the packaging on the product you’ve legally purchased from a Louisiana dispensary.

Outside the borders of Louisiana, laws in the state you’re visiting apply. Use caution when traveling and plan ahead. Crossing state lines is kind of a “no man’s land.” Federal law applies there. Overall, most highway patrolmen don’t go looking for people who are carrying their medical marijuana gummies from Louisiana to Arkansas, but they could have legal recourse if they stumble upon it while you’re pulled over for something else.

Louisiana does have some laws in place. There is a law now that protects state employees from being fired for a drug test that shows THC, as long as they are not consuming on state property and their job does not require operating heavy machinery or vehicles.

There’s also a law that says police can’t enter someone’s home without a warrant based on the smell of marijuana alone.

There’s also a law that says the driver or passengers of a motor vehicle may not consume marijuana (that’s the cannabis with THC) via smoking or vaping. Violators may face a $100 fine. However, the law also states that a police officer may only “enforce the provisions of this sections as a secondary action when the law enforcement officers detain the driver for another violation.”

What about marijuana plants, concentrates, and hashish? Still, schedule 1 is under federal law and they all will fall under the description of “marijuana” because they all have more than .3% THC (tetrahydrocannabinol). As far as Louisiana law goes, anything obtained outside of the nine designated dispensaries is illegal to possess within Louisiana.

Beyond decriminalizing possession of 14 grams or less of legal marijuana, Louisiana has also passed a “low THC” law that protects users of cannabis extracts that are high in CBD and low in THC in instances where a physician has recommended such treatment to a patient with a state-qualifying condition.

However, even though VA doctors can’t prescribe marijuana and military pharmacies can’t fill any recommendations and active duty or employees can’t consume marijuana or CBD, the Veterans Association has stated that it will not deny benefits to veterans who take medical marijuana legally for PTSD or other service-related conditions. Veterans can disclose their use of legally obtained medical marijuana to treat their chronic conditions related to their service to their VA physician without fear of losing their benefits.

According to veteran.com, the VA official site has a list of rules, information and reassurances for veterans concerned about being forthright concerning their medical marijuana use with a VA caregiver. Specifically:

Plan ahead, know the law, consult an attorney if necessary, and definitely contact your state legislature to encourage them to pass laws that protect medical marijuana patients, cannabis businesses, physicians, and researchers in Louisiana.