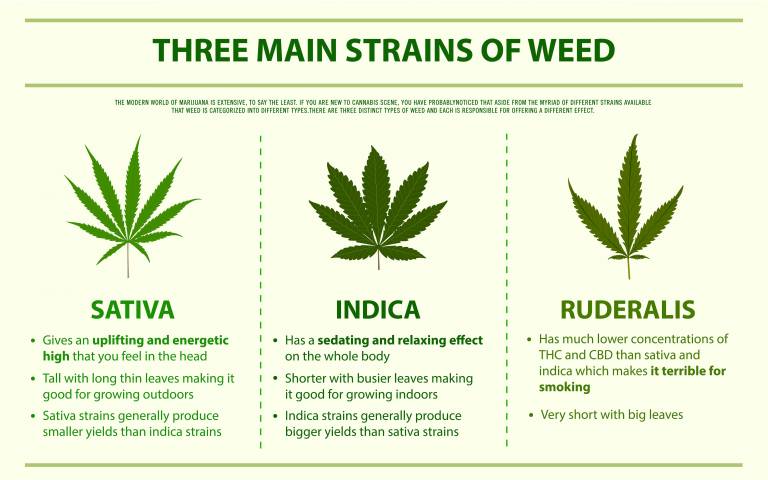 Indica, Sativa, and Ruderalis … What are the Differences?

It’s common knowledge that Cannabis can be split into two categories: marijuana, known to cause psychoactive effects, and hemp, which has extremely low levels of the psychoactive compound THC and is often used for industrial uses. However, cannabis plants can actually be separated into three distinct varieties: Sativa, Indica, and Ruderalis.

Sativas and indicas are defined by two main factors:

Cannabis Sativa is an extremely diverse plant and is used for recreational, medicinal, and industrial purposes. The industrial form of the plant is traditionally known as hemp and often contains low levels of cannabinoids, particularly THC. In order to be classed as industrial hemp, the plant must contain no more than 0.2% THC in the UK (0.3% in the USA). However, the Sativa plant can also contain high concentrations of THC and other cannabinoids and can provide multiple harvests per year and have relatively long flowering periods. Sativa plants take longer to grow, mature, and finish than indica.

Indica can also be used for a variety of purposes, but is most often associated with recreational use. The plant may also be used for industrial purposes such as the production of paper, clothing, and building materials. Indica cannabis plants will go through their entire cycle and finish up faster than sativa does.

Originating in eastern Europe and Russia, Cannabis ruderalis is autoflowering, meaning it flowers based on age rather than light cycle. Cannabis ruderalis has been crossed with Cannabis sativa in order to make growing cannabis easier for beginners or those who don’t have the space, as well as to increase the amount of CBD in some kinds of cannabis strains. A 2005 study compared the genetics of C. indica, C. sativa, and C. ruderalis and found that the ruderalis gene pool lies somewhere between hemp and marijuana cannabis varieties.

It is theorized that the variety actually descends from Indica varieties. This theory suggests that Ruderalis is the result of cultivated cannabis species beginning to grow wild and adapting to harsh environments.

Essentially, years of hybridization has meant that indicas and sativas we find today can have a similar chemical makeup. To get a better idea of what effect a particular strain will have, you’ll need to take a look at the test results. Those will tell you what the ratio of THC to CBD is, what other cannabinoids it contains, as well as what terpenes.

There are no real medical differences between indica and sativa, although there may be some differences in the cannabinoids terpenes they express on occasion. Cannabis from equatorial regions may contain more THCV, whereas cannabis from more mountainous regions may contain more of the terpene myrcene. However, this is not always the case, so making any definitive claims is difficult.

Is There a Better Way to Differentiate Between Cannabis Varieties?

Here are several variables that can be used to group different types of cannabis together:

Although not as easy as simply stating “indica” and “sativa”, this would be a more accurate way of determining the actual effect of a particular cannabis variety, and would be of great help for those who are using cannabis for very specific medical needs. The old way of indica and sativa labels, while it had its uses, is not accurate enough to be of any real use.

Whether the product is made from a indica or sativa, medical marijuana can help patients suffering from a range of medical conditions. Speak with one of the physicians at The Healing Clinics to find out more.