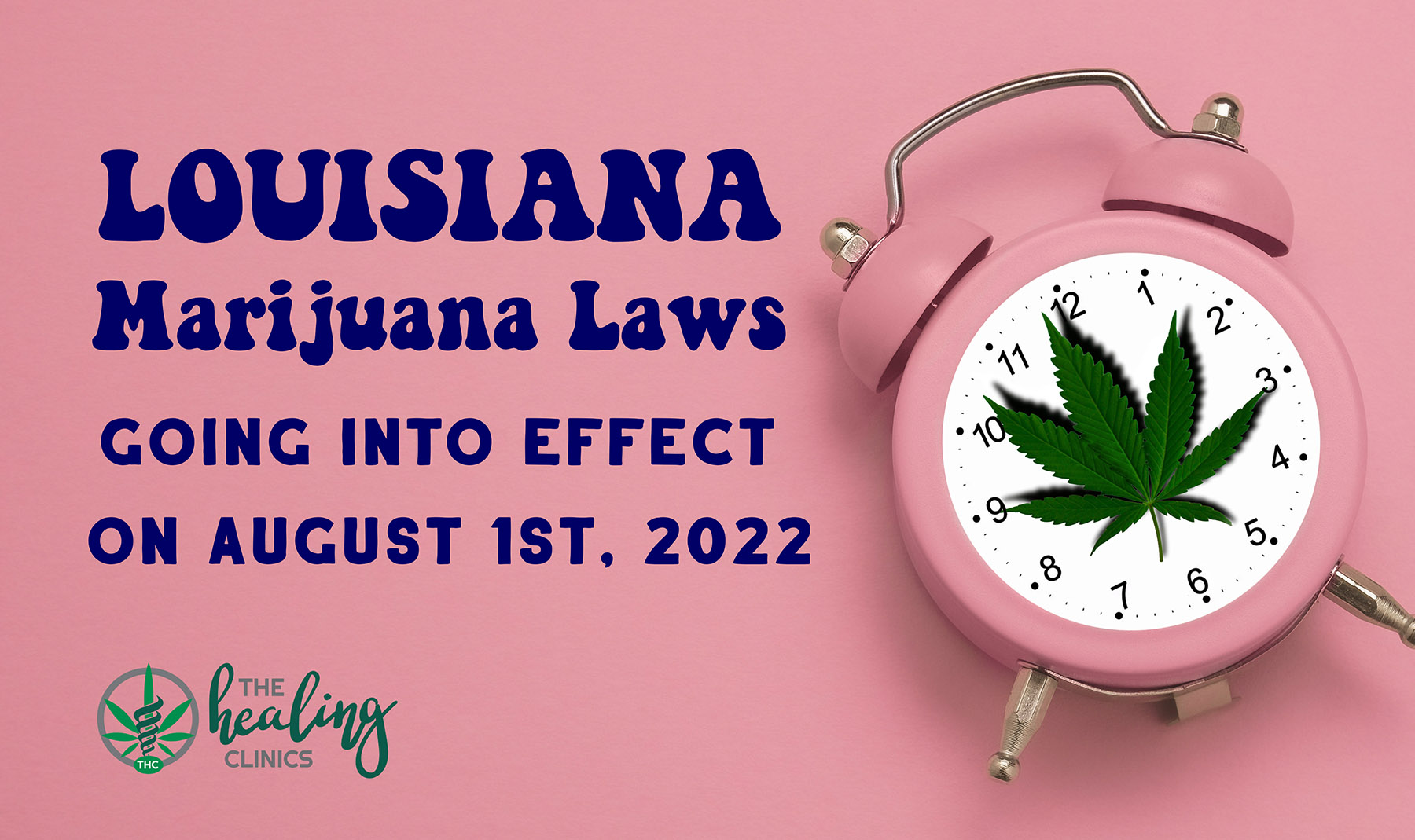 The Louisiana legislature has been busy in 2022 especially when it comes to medical marijuana. Recreational cannabis is still illegal in Louisiana, but current law has been expanded to accommodate the growing number of patients using medical marijuana and the businesses that support them. Here’s what you can expect.

Sponsored by Representative Joseph Marino, this bill was signed into law on June 15th and goes into effect on August 1, 2022. Act 438 authorizes the dispensing of medical marijuana to certain qualifying patients who are NOT Louisiana residents or who are short-term residents (less than 30 days) of the state. You must show a medical marijuana card, recommendation, or unexpired label on product you purchased in your former state; your state driver’s license or ID, and you must fill out a short form that will be provided by the dispensary. Read More

This new law, submitted by representatives Joseph Marino and Cedric Glover,  provides relative immunity from prosecution for medical marijuana in Louisiana. It protects visiting, qualifying patients for certain violations of the Uniform Controlled Dangerous Substances Law. The law states: that any person who is a patient of the state-sponsored medical marijuana program in Louisiana can possess marijuana in an approved form and amount that is obtained through an approved dispensary. It further states that caregivers, or parents of a child in the program (if the child lives with the parent) are also immune from prosecution. This excludes recreational or any marijuana obtained outside the state medical marijuana program. Read More

This act is regarding searches without a warrant of a person’s place of residence based solely on detecting an odor of marijuana. This is no longer probable cause for search without a warrant and will go into effect on August 1st, 2022. Read More

Act 491 states and makes official several changes to the medical marijuana program in Louisiana. 1) The Medical Marijuana Program in Louisiana will no longer be overseen by the Louisiana Board of Medical Examiners but will be run by the Louisiana Department of Health and Human Resources (LDH); 2) Other duties that were previously given to the Department of Agriculture and Forestry (LDAF) will now be given to LDH; 3) The Louisiana Board of Pharmacies will continue to oversee regulation of marijuana dispensaries in Louisiana; 4) LDH will license and regulate laboratories that conduct testing of medical marijuana products and will choose and license marijuana production contractors and provide requirements and standards for them; 5) LDAF will continue certain laboratory testing services and authorize certain institutions to conduct research on marijuana for therapeutic use. Read More

Act 6521 provides protection against employment discrimination against public employees for use of physician-recommended medical marijuana. This includes state employees or prospective state employees who use medical cannabis and prohibits employers from causing them to lose their job or being rejected for employment by the state based strictly on a positive drug test for medical marijuana in cases where they have been diagnosed with a debilitating medical condition and a state licensed physician in good standing has recommended marijuana for therapeutic use. However, the Act does not allow for consuming medical or recreational marijuana on company property or during work hours and prohibits use if the employee is to operate a state vehicle, maintain a state vehicle, or supervise any employee who drives or maintains a state vehicle. Read More

Act 478, sponsored by Representative Laurie Schlegel, goes into effect on August 1, 2022. The Act prohibits the driver or passengers from smoking or vaping while operating a motor vehicle on a public highway or right-of-way. This would include smoking or vaping recreational or medical marijuana. The fine was established at $100 for anyone in violation. The text further states that this is considered a nonmoving violation and any citation will not be included on the driver’s operating record. Read More

At the time of this post, all these mentioned above are Acts rather than Laws, at least until August 1st, 2022. However, the two words are often used interchangeably. Here’s the definition of each:

ACT – A bill that has been finally passed by the House and Senate, enrolled, signed by the legislative presiding officers, signed by the governor (or allowed to become law without his signature), and assigned an Act number by the secretary of state.

LAW – A law is defined as an assemblage of rules and regulations that are indispensable and must be followed.

The “effective date” defines when the Act will become law in the state.

Whether you’re traveling or a resident, according to Louisiana law, you must first be approved by a physician licensed by the State of Louisiana. Get started on your journey to healing by clicking the button below.